Why the 17 Global Goals For 2030 Are Actually Not Impossible

If you follow POINT on Twitter, you probably saw a number of mentions about the Global Goals which were recently graveled by the United Nations. If you missed it, let’s catch you up:

At the end of September, the United Nations imposed 17 ‘benchmarks’ that serve as goals to reach for in order to create a better, more just world. These 17 goals are known as the Global Goals, and the expectation is that everyone around the globe will participate and do their share trying to achieve them.

The goals are ambitious… many people saw them and scoffed, thinking it was overly optimistic to ever believe that by 2030 we could collectively address so many complex and overwhelming issues. So what are these 17 steps to creating a better world? The Global Goals website goes into pretty intense detail about each one (but read on for an overview).

1. END POVERTY IN ALL ITS FORMS EVERYWHERE

3. ENSURE HEALTHY LIVES AND PROMOTE WELL-BEING FOR ALL AT ALL AGES

4. ENSURE INCLUSIVE AND QUALITY EDUCATION FOR ALL AND PROMOTE LIFELONG LEARNING

5. ACHIEVE GENDER EQUALITY AND EMPOWER ALL WOMEN AND GIRLS

7. ENSURE ACCESS TO AFFORDABLE, RELIABLE, SUSTAINABLE AND MODERN ENERGY FOR ALL

8. PROMOTE INCLUSIVE AND SUSTAINABLE ECONOMIC GROWTH, EMPLOYMENT AND DECENT WORK FOR ALL

10. REDUCE INEQUALITY WITHIN AND AMONG COUNTRIES

13. TAKE URGENT ACTION TO COMBAT CLIMATE CHANGE AND ITS IMPACTS

14. CONSERVE AND SUSTAINABLY USE THE OCEANS, SEAS AND MARINE RESOURCES

Does all of this seem like a possibility to you? Perhaps not at first, and that’s understandable – those are A LOT of REALLY COMPLEX issues. But if we set aside our pessimism for just a minute, maybe we would come to a different conclusion. Why? Because this question has been asked before, and the answer may surprise you.

The first goal on that list is ending extreme poverty. Extreme poverty is defined by someone living on less than $1.25 a day. This goal calls for an end to that, as well as cutting the proportion of people living in all levels of poverty in half. If that sounds familiar to you, that’s because it should be: in 2001, the UN established as one of their “Millennium Goals” the goal of halving the global population living in poverty getting it down to 18%. Here’s the catch – THEY ACTUALLY SUCCEEDED. 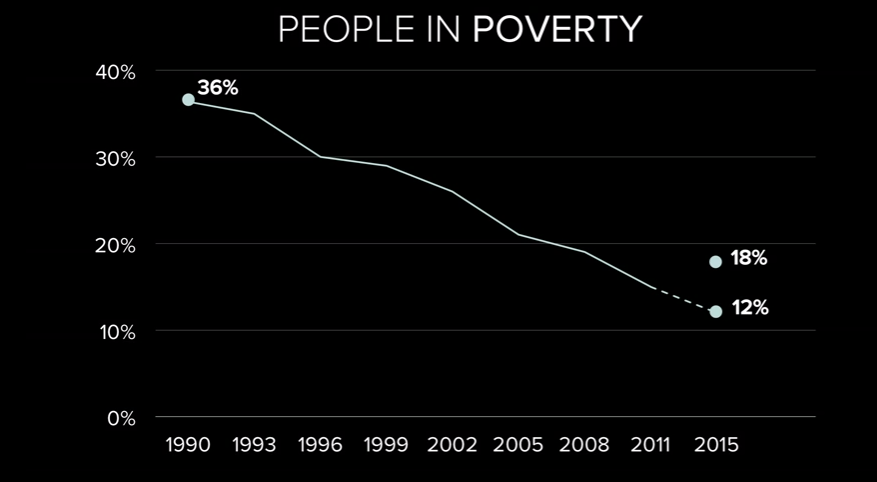 sourced from Michael Green’s TED Talk: “How we can make the world a better place by 2030”

And this isn’t the first time we have seen a seemingly unattainable goal set, and then been shocked as it actually came closer to fruition than anyone ever dreamed. The Gates Foundation, for example, decided to take on malaria, a mostly-preventable disease which killed 627,000 in 2012, of which 77% were under the age of 5. Since that, we have seen a 42 percent decline in malaria deaths worldwide between 2000 and 2012, and recently in the news we have witnessed the development of the world’s first malaria vaccine. Bill Gates now thinks we can see the end of malaria in our lifetime. For a disease that impacted over 200 million people in 2012, that is saying a great deal about what can be done when we set aside pessimism and stand up and try.

This TED Talk addresses ways that we can measure the progress of the Global Goals, and the speaker seems to agree.. It won’t be easy, but it might be possible. And it’s worth trying.

P.S. Pssst…awesome news, guys: we’ll be keeping up with how these goal areas are playing out around the globe for you, so subscribe via e-mail below for non-spammy updates from the blogs you see here.