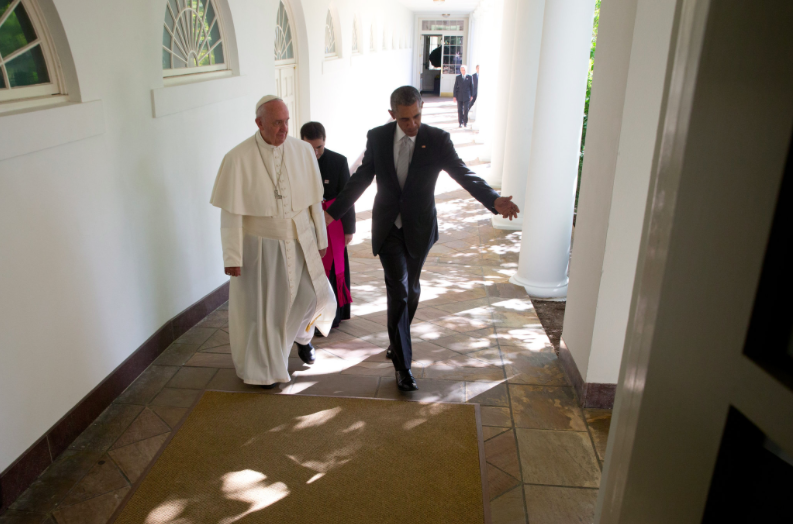 Of the 265 before him, only three have visited stateside, two of which have visited Washington. Pope Francis’ 6-day, 3-city visit to the United States last week brought with it a refocusing on the communities and families by which America was largely built, and a call on the national government to protect their futures.

“‘Humanity has the ability to work together in building our common home,” the pope told a crowd of thousands on the South Lawn of the White House in his first major speech in English. “As Christians inspired by this certainty, we wish to commit ourselves to the conscious and responsible care of our common home.’” (Baker, Shear. NY Times)

Pope Francis was quick to voice support for the current administration’s efforts against climate change saying of the environment that it is being ‘“devastated by man’s predatory relationship with nature.’” (Baker, Shear. NY Times)

Last Thursday, POINT brought you news of the further defined Sustainable Development Goals, many of which concern the preservation and development of the environment’s natural and vital resources.

The leader of 1.2 billion Catholics worldwide, Pope Francis assured the American public – and world – that his leadership (and power therein) lies in service, of which he does not think he has yet done enough.

With poignant stops along the way to visit American sisters (nuns), school children, the imprisoned and homeless, Pope Francis’ humble response to raucous fanfare spoke louder perhaps than his words ever could.

A ‘call for compassion’ was made to Congress on behalf of migrants moving in hopes of the American dream, or rather, the allowance to dream.

‘“I am happy that America continues to be, for many, a land of ‘dreams,’” he said. “Dreams which lead to action, to participation, to commitment. Dreams which awaken what is deepest and truest in the life of a people … We, the people of this continent, are not fearful of foreigners, because most of us were once foreigners.”’

According to TIME, it was a message most clear during Francis’ visit at Harlem Our Lady Queen of Angels School, when he intimated to the children – many immigrants and refugees – his understanding of how hard it can be to move away from home into a new culture and new primary language, leaving behind close friends.

As Pope Francis’ first visit to the United States has ended, he leaves a nation reverberating in echoes of his challenge to see to it that the nation, world and those within it be protected, given the space to dream and provided the promise of opportunity.